i recently celebrated a birthday, i say a birthday when i mean my own. i am officially in the late twenties club (if there is an actual club then my invite was lost in the post). what a better way to celebrate than to get my friends and head to my favourite city in all of the land. london.

there is something about the white bricks of kensington and chelsea, the hustle of the circle line and even bank tube station that i just love. i think one day i’ll end up living in the capital. hence the title, london calling. 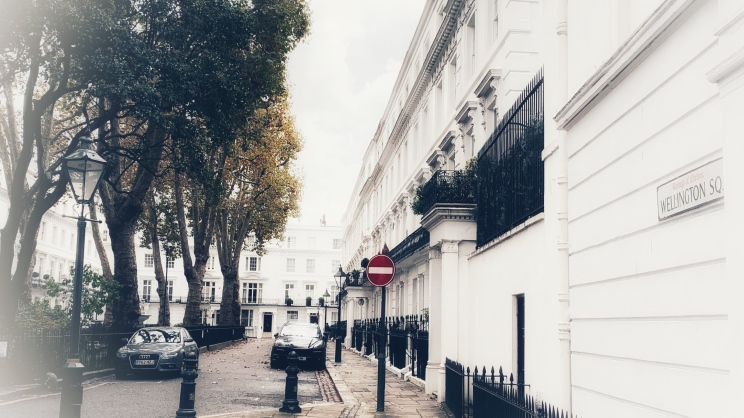 i am lucky enough to work for hilton hotels, well thats not the lucky part. i do love my job, but referring to the amazing travel programme that comes with it. my friends and i stayed out at canary wharf which was a great pit stop point just on the jubilee line. far enough out to get a restful nights sleep but easily accessible for central.

i have visited london so many times, and every time fall more and more love with the place. my usuals are covent garden, oxford street, carnaby street and of course all the tourist spots. this time i wanted my trip to be inspired as if i lived in london. so i took the help of my london residents to plan a trip, which actually was based on food and drinks to celebrate.

manchester piccadilly to london euston, on the 10.15 train on thursday was the easiest thing, one stop in crewe and then direct in the capital. less than two hours, it was the ideal commute! i met my friends and off we started.  we dropped the bags and headed over to, you guessed it covent garden. we spent some time watching street performers, there is so much talent! before heading to somewhere we were dying to try – petersham nurseries covent garden. a deli cafe and homeware shop. so #instaworthy.

we tucked into the most amazing lunch, and wandered around the farm style shop. we looked at all the christmas decorations, and it was all very reasonably priced! i personally had a pomegranate and olive salad with home baked butternut squash quiche. beaut. after this we stumbled across a dirty martini, and needless to say we got our halo’s dirty! (thats the company tag line). 50% off cocktails and beers, it was mid afternoon. we left a few hours later – for an interesting walk to the tube and dash across london.

after work drinks on thirsty thursdays, this is proof that capital cities are bouncing, excuse the pun. there is always something fun to do. we met with a gal pal and fashionista straight from her office and headed across to the hoxton. a super cool hotel and restaurant. we had burgers, mac&cheese, wine and ended up in the photobooth. the food was that good i didn’t even photograph it. it was the perfect spot to catch up with friends and still feel the after work vibe, getting us ready for what was to come.

then we went to bounce. oh my god i haven’t laughed or had so much fun in the longest time! basically, pingpong and drinks. what could go wrong?

well. balls flying everywhere, hitting the bouncer, spilling drinks, many a boomerang, getting lost in the toilets, over ordering doubles. you get the drift. as the drinks were flowing the game playing got worse. we tried singles, we tried doubles and well we mixed the teams so many times its pretty hard to determine who won. but so much, the underground venue was a mix of vintage and modern and the perfect it spot. still full at 10pm clearly a popular one in the area.

friday october 26th, i awoke to balloons being thrown at me, cards and gifts galore. we got ready, and headed across london – literally all the way across to chelsea. home of the white stone houses, the embankment, but most importantly – the ivy garden chelsea.

the arrival on kings street, you cannot miss the autumnal floral displays outside as you enter and walk into the most stunning environment. a table of four in a secluded corner, surrounded by flowers, mirrors and the most botanical decor. 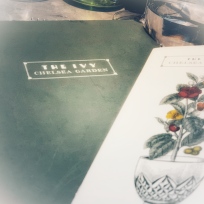 the afternoon commenced with a glass of the ivy champagne followed by culinary delights and even a little tartlet with a candle. the attention to detail in this venue was impressive. a must do. given the location, and the food offerings, its also good value for money.

another place we visited when we around london, was madison by st pauls, a cool trendy  cocktail bar and restaurant with with most spectacular views of london. located in the shopping centre you can find an elevator to the to.

i cannot describe how dangerous bottomless brunch is.

free flowing bellini’s always seems like a good idea. until 3 hours later and you can’t walk and have a train to catch. i was recommended bourne and hollingsworth in angel islington for brunch. it did not disappoint. the decor was very house of hackney.

the food was amazing too, i opted for the classic avocado and eggs combo. its not brunch without it. there was lots of other options too. food service was swift and we were all really just concentrating on the glasses being topped up. 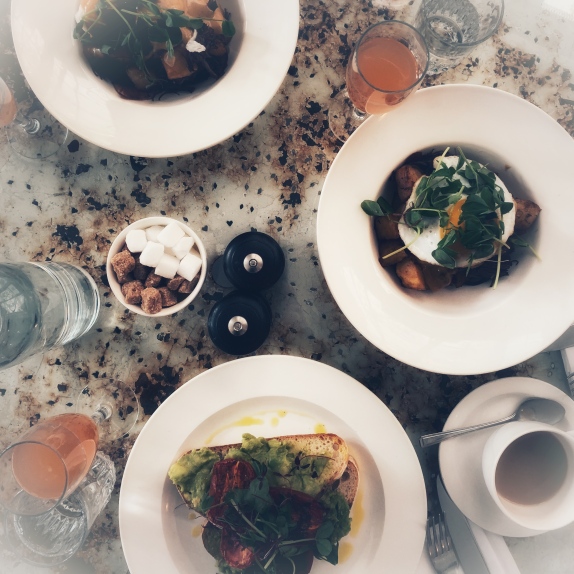 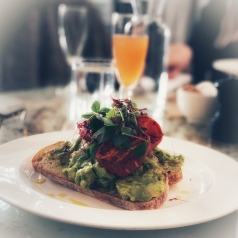 quite possibly the best birthday weekend. there was a mad dash to the train. a drunken train journey and then more celebrations in manchester. needless to say its taken me a while to recover from this.

london in a nutshell is always a good idea. the possibilities are endless. great food, company and surroundings certainly didn’t disappoint. there were so many inside jokes on this trip so ill leave you with this.